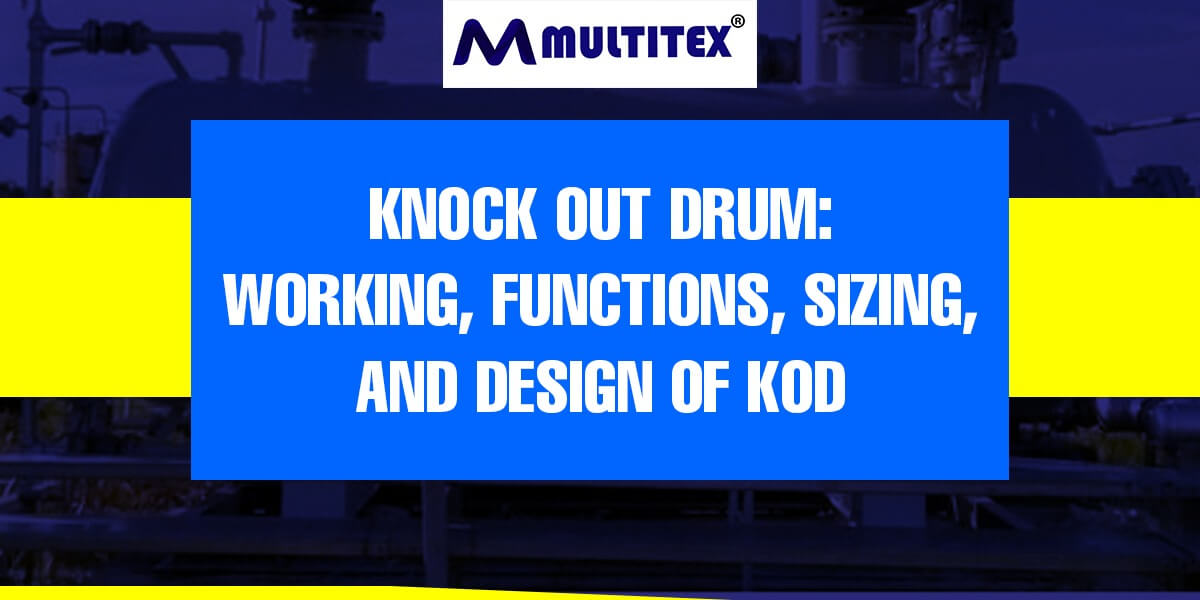 No Comments on Knockout Drum: Working, Functions, Sizing, and DesignPosted in Multitex Group By Multitex-groupPosted on February 2, 2022February 3, 2022

What is a Knockout Drum (KOD)?

A knockout Drum (KOD) is a part of the flare header system and is used to remove liquids and oil from flare gases.

A flare system is a compulsory addition to petroleum and natural gas refineries to ensure gaseous wastes are safely removed from the processing setup. Instead of sending out hazardous hydrocarbon gases produced in an industrial plant directly into the atmosphere, it is burnt in the flare system in an environmentally safe process. The burning of the gas is similar to that of gas burning for home cooking.

Flaring these gases produces water vapor and carbon dioxide, both of which are safer to be released into the atmosphere.

The relieved gases may contain specific amounts of water or oil, which can be dangerous. A KOD is a device that will remove oil or water from these relieved gases. That’s why this device is also called a vapor-liquid separator in many places.

The function of a Knockout Drum

A flare system is an integral part of chemical plants, natural gas and oil processing plants, petroleum refineries, and oil and gas landfills. All these plants and production sites release harmful gases as a side-product, and it is dangerous to release these gases into the atmosphere.

As a result, a flare system is installed at an elevated height that burns these gases and converts them into safer by-products, which are then released. A knockout drum is a part of such a flare system.

These drums are also called knockout pot, flare KO drums, or knockout vessels in different places. The drum basically separates water and oil from these relief gases to make the flaring process safer.

Why is a knockout drum required?

A knockout drum helps remove liquids and oil from the flare gases. Why should this be done?

There are six standard configurations in which knockout drums are designed. The difference mainly lies in how the vapors are directed to be sent out.

This is probably the easiest of all designs and is used when the vapor flow is high, and a larger liquid storage capacity is needed. In this model, there is no internal baffling needed. The gas enters through one end of the drum and leaves out from the other side. Water droplets get accumulated at the bottom of the drum and are sent out through a drain.

In this type of knockout drum, the drum is placed vertically. Inlet gas enters the chamber on a horizontal axis. There are baffles placed to ensure the gas is directed downwards. Here, the water vapor collects at the bottom of the drum, and then the gas flows upwards to the flare header outwards.

A tangential nozzle is placed at a slightly inclined angle. In a vertical drum, the tangential inlet pipe sends in gases to the drum with a center centrifugal separator. The separator spins and sends the inlet gases down to the bottom of the tank. Here, liquid droplets go through coalescence and settle down at the bottom. Once the gas reaches the bottom of the tank, the centrifugal tube changes its flow direction. Now, the gas is directed up the knockout drum. It issent out through a vertical outlet pipe at the top of the tank.

This is also a simple design where the gases are sent into the knockout drum in two directions – from either ends of the drum horizontally. The liquid droplets combine and settle down at the bottom of the drum while the gases flow out through the central outlet.

This works exactly opposite to the last type. Here, the gas mix is sent through the central inlet of the drum. Once the liquid droplets settle down, the gas flows out through either end of the drum.

The knockout drum must be located at the right place, depending on the considerations below.

How To Maintain Knockout Drums?

Knockout drums, just like any other piece of equipment, need to be maintained and services time on time. Since these drums handle hazardous gases and are exposed to thermal radiation, they have to be maintained as per vendor suggestion. Talk to your knockout drum manufacturer and take some time off to maintain the drum periodically.

What are the types of Knock-out Drums?

There are two basic kinds of these drums available.

Your vendor will be able to suggest the correct type of drum based on the gas that you process.

What is the burning rain phenomenon?

The burning rain phenomenon is a hazardous situation that often occurs in petroleum, natural gas, and oil refineries and needs to be curbed initially.

You must now know that the gas that flows into the flare system contains certain amounts of liquids too. If your flare system does not contain a Knockout drum, the liquid-contaminated gas burns in the flare unit, and the liquid will catch fire. As a result, the liquid falls down the elevated pipe as burning rain. Coming in contact with the burning rain can be very dangerous for people working in the unit.

A Knockout drum placed strategically can prevent this condition.

There are other problems that these liquids can cause in the flaring process.

We have an entire blog dedicated to slugs and the ways of capturing and eliminating them. Do read this to understand more.

What happens to the oil and water steams in the knockout drum?

At the base of the drum is a boot. This boot separates water from oil and other types of hydrocarbons. The oil and water are both pumped out to appropriate places.

Your flare system unit definitely needs to have a power backup to ensure the water and oil sources are pumped out, even if there is a problem in the normal power supply. Otherwise, excess accumulation of water and oil can become hazardous.

What happens to the outflow gas?

Ideally, the gas that flows out from the drum needs to be reused. Since it burns just like cooking gas, it can be used for heating processes or to provide energy. However, in many cases, it is not easy to reuse the gas as the composition of the gas is different each time. Therefore, the gas flows to the seal drum.

What is the difference between a Knockout Drum and a Separator?

A lot of times, people use the term knockout drum and separator interchangeably. When you look outwardly, they both may look the same. However, there are a few subtle changes you should look out for internally.

Knockout drums are exclusively used in flare systems, mainly for safety purposes. It may be used to recover products in some instances, but safety is the main priority.

Separators, however, have a broader area of application. They may be used to separate solids, liquids, and gases from one another so they can be further processed. Separators can be used in many different areas and industries. You can call a knockout drum a type of separator.

Flaring systems are a must-have setup if you run petroleum, natural gas, or oil refinery units. Make sure you invest in a well-equipped knockout drum to improve the quality of the flaring processes.

A knockout drum not only helps recover products but offers safety to the unit and the people working there.

Multitex offers custom-designed flared Gas API KODs that are a part of our filtration and separation category of products. We offer both horizontal and vertical knockoff drums.

Our horizontal models are a perfect fit for industries that require the processing of large amounts of flared gases and have the luxury of space.

For industries that lack space, vertical knockout drums are perfect. Are you not sure what kind of knockout drum fits your flared system? Get in touch with experts at Multitex to understand your requirements better.